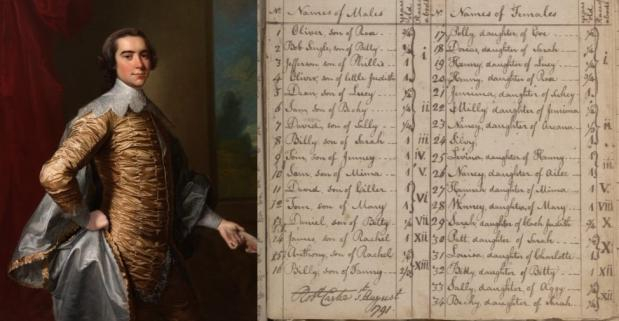 On September 5, 1791, Robert Carter III presented a remarkable document to the District Court in Northumberland County, Virginia. In a “Deed of Gift,” Carter set out a plan for the gradual manumission of 452 enslaved people he owned on plantations in the Tidewater and Shenandoah. Carter declared that he had “for some Time past been convinced that to retain them in Slavery is contrary to the true Principles of Religion and Justice, and that therefor it was my Duty to manumit them.”

The plan freed slaves gradually according to age. Though it was designed to withstand resistance from his heirs and the community, Carter’s children and his neighbors fought his plan fiercely in public and the courts. Carter’s document, however, withstood these challenges.

As Carter recorded the first emancipation certificates, his enslaved people seized newfound opportunities for freedom. Former slaves now negotiated with their former master to farm Carter’s lands on their own and unite with family members, many of whom still toiled in slavery. Despite tightening laws on free blacks, most of the freed men and women stayed in the counties where they had been enslaved.

The work of emancipation continued as late as 1852, when Carter’s daughter Julia certified the freedom of Elias Reed. Today thousands of people in Virginia and other states trace their ancestry to the more than 500 individuals ultimately emancipated by Carter’s deed and the new world they forged in freedom. 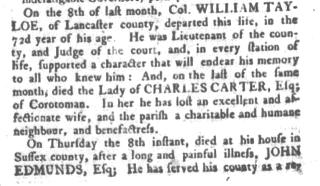 This post from the Virginia Gazette reported the death on January 31, 1770 of Mary Walker Carter, first wife of Charles Carter of Corotoman. Published three weeks after her death, the account said in her Carter “has lost an excellent and affectionate wife, and the parish a charitable and humane neighbour, and benefactress.” Mary and Charles were both the grandchild of Robert “King” Carter but by different wives: Mary by “King” Carter’s second wife Betty Landon Carter and Charles by his first, Judith Armistead Carter.

The paper offered no details on what caused her death and was actually off by one day: buried at Christ Church, next to her grandparents, the inscription on Mary’s stone reads “Under this stone are the remains of Mary Carter, the affectionate wife of Charles Carter of Corotoman who died on the 30th of January, 1770 after a painful illness of three months during which time she discover’d a truly Christian fortitude. Aged 34 years.”

Within the year Charles Carter had remarried. The paper reported in its November 29, 1770, issue that Carter had married “Miss Nancy Moore, second daughter of Colonel Bernard Moore.” In the mid-1770s the couple would move to Shirley on the James River following the death of Carter’s mother, Elizabeth Hill Carter.

Among the objects on display in the Carter Reception Center museum is a gold watch made by renowned watch and clockmaker Thomas Tompion of England. Born in Bedfordshire in 1639, Tompion apprenticed to a London clockmaker when he was 25. A decade later, Tompion set up shop at The Dial and Three Crowns at Fleet Street, where he produced over 650 clocks and 5,500 watches until his death in 1713.

Historic Christ Church & Museum’s Tompion watch, signed and numbered by the maker, dates to 1711-1713 and is 22-carat gold. Robert “King” Carter gave the watch to his daughter Elizabeth, who in 1724 married Dr. George Nicholas of Williamsburg. The watch descended through the Nicholas family until it was purchased by Robert Hill Carter II, who left it to his son Beirne Blair Carter. Beirne Carter and his daughter Mary Ross Carter Hutcheson loaned the watch to HCC&M in 1976 for display in the museum.

Few colonial Virginians could afford such an item. Retired Colonial Williamsburg curator Graham Hood says the watch speaks to Robert Carter’s status as the most powerful Virginian of his day:

“It never occurred to me that a Virginian of that time would be up to the level of such an upscale consumer item until I saw the gold pocket watch that “King” Carter had owned, now on display at the Carter family museum at Christ Church, Lancaster County. A rich and heavy object, it says more about the social posture and ambition of that man than almost anything else I know.”

In July 1720, Robert Carter sent London merchant William Dawkins two hogsheads of tobacco levied by the vestry of Christ Church Parish to purchase communion silver. Acting as churchwarden, Carter directed that the “Church plate” cost £20 or “thereabouts” and include a flagon and communion plate engraved with “Christ Church Parish Lancas[te]r County & ye Date of the Year.” Carter authorized Dawkins to charge his account for any costs not covered by the revenue from the two hogsheads, which Carter noted had sailed aboard his ship The Carter and were marked “CCP.”

Today this flagon and communion plate, along with a paten and chalice, shine proudly in the museum in the Carter Reception Center. Housed in a beautiful, vertical case located on access with the museum entrance, the silver is a favorite stopping point for visitors.

That the silver survived is yet another remarkable chapter in Christ Church’s history. Captain William Tell Chase and his family used a wooden box (also on display in the museum) to guard the silver in the nineteenth and twentieth centuries. At some point the silver made its way to a local bank vault, where it remained until 1988 when it was first displayed in the museum.